Carpenters Group are very proud to support Fans Supporting Foodbanks and their partners in every way possible. We have worked with them in our local region for a number of years and continue to do in every way we can.

Everton FC and Liverpool FC players will mark the fifth anniversary of Fans Supporting Foodbanks by wearing a special patch with the initiative’ logo on their warm-up shirts ahead of this weekend’s Merseyside Derby at Goodison Park.

The patches commemorate five years to the day that Dave Kelly, Ian Byrne MP and Robbie Daniels put tribal colours aside to collect food in the hope of supplying the growing demand for foodbanks on Merseyside.
Since then, Fans Supporting Foodbanks has received the backing of both football clubs and the people in the city as well as other clubs and fans’ groups across the country.

The distinctive Fans Supporting Foodbanks collection van had been a permanent fixture at both Goodison Park and Anfield over the past five years. With Blues and Reds now supporting from home, there are still ways to support the campaign and help tackle food poverty across the city as foodbanks become an even more important community resource as Merseyside lives through the coronavirus pandemic and the impacts of stricter lockdown safety measures.

Dave Kelly, Chair of Fans Supporting Foodbanks, said: “The Merseyside Derby is unique in world football. Unlike many others we have divided loyalties with Reds and Blues in the same family, both supporting our respective clubs with pride and passion. This City unlike no other, understands the concept of solidarity that truly encapsulates what we do. Food insecurity continues to grow, the 5th anniversary gives us all the opportunity to reflect on our initiative but also to thank supporters and the clubs who have joined us on our journey.”

The warm-up tops worn by Everton FC and Liverpool FC players will be signed and auctioned to raise much-needed funds to sustain the demand of emergency food parcels as part of the campaign against food Insecurity. 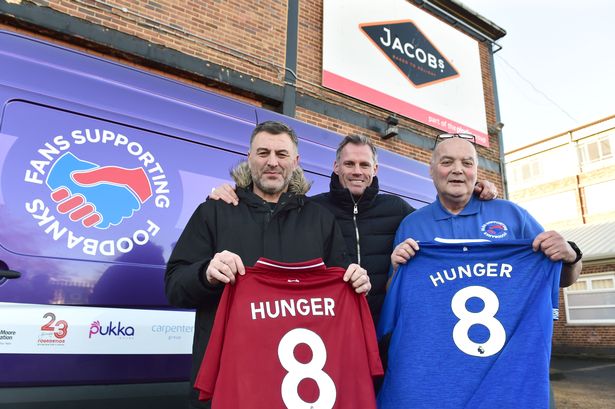 To support the work carried out by Fans Supporting Foodbanks, donations can be made to Fans Supporting foodbanks by visiting https://donorbox.org/fanssupportingfoodbanks5years or directly to the North Liverpool Foodbank by simply texting FOODBANKFC to 70460 to donate. Donations will cost £5, plus your standard network message rate.

Some of the priority items include: