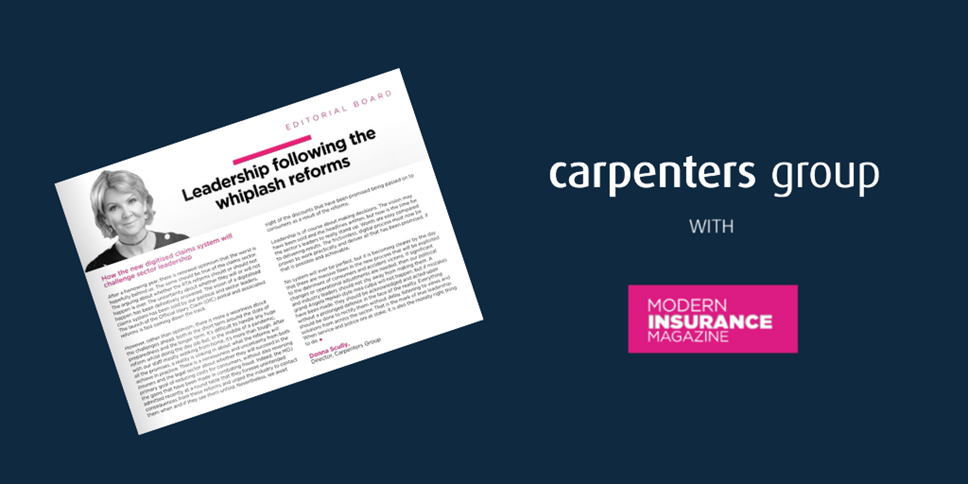 Our Director, Donna Scully, has been speaking to Modern Insurance Magazine about how the new digitised claims system will challenge sector leadership

After a harrowing year, there is renewed optimism that the worst is hopefully behind us. The same should be true of the claims sector. The arguing about whether the RTA reforms should or should not happen is over. The uncertainty about whether they will or will not happen has been definitively answered. The vision of a digitalised claims system has been sold by our political and sector leaders. The launch of the Official Injury Claim (OIC) portal and associated reforms is fast coming down the track.

However, rather than optimism, there is more a weariness about the challenges ahead, both in the short term around the state of preparedness and the longer term. It’s difficult to handle any huge reform whilst doing the day job but, in the middle of pandemic, with our staff mostly working from home, it’s more than tough. After all the promises, a reality is sinking in about what the reforms will achieve in practice. There is a nervousness and uncertainty from both insurers and the legal sector about whether they will succeed in the primary goal of reducing costs for consumers, without also reversing the gains that have been made in combating fraud. Indeed the MOJ admitted recently at a round table that they foresee unintended consequences from these reforms and urged the industry to contact them when and if they see them unfold.  Nevertheless, we await sight of the discounts that have been promised being passed on to consumers as result of the reforms.

Leadership is of course about making decisions. The vision may have been sold and the headlines written, but now is the time for the sector’s leaders to really stand up. Words are easy compared to delivering results. The frictionless, digital process must now be proven to work practically and deliver all that has been promised, if that is possible and achievable.

No system will ever be perfect, but it is becoming clearer by the day that there are massive flaws in the new process that will be exploited to the detriment of consumers and accident victims. If significant changes or operational adjustments are needed, then our political and industry leaders should not shy away from making them. A grand Angela Merkel-style mea culpa will not happen, but if mistakes have been made, they should be acknowledged and acted upon without a prolonged defence in the face of the reality. Everything should be done to rectify them without delay, listening to views and solutions from across the sector. That is the mark of true leadership. When service and justice are at stake, it is also the morally right thing to do.