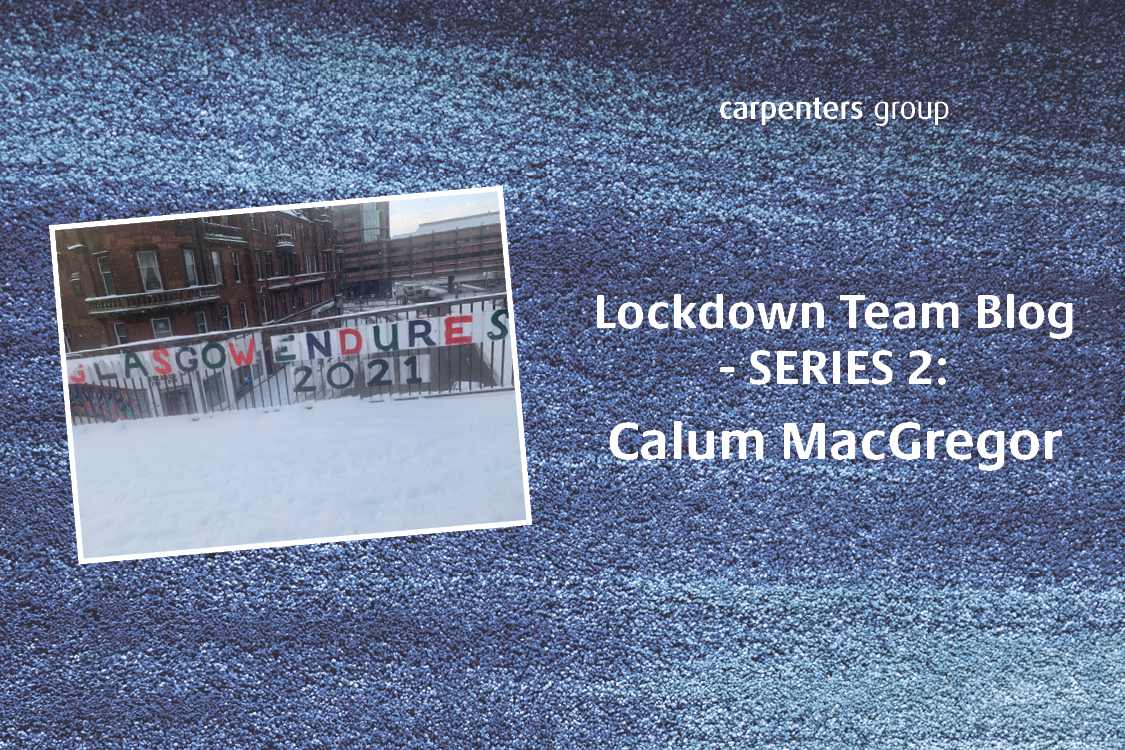 Last year, our teams produced a series of blogs written by colleagues across multiple divisions of the company. They provided a small insight into our evolving working practices and values as we all adjusted to our new post-COVID19 world. Now we're back with our second series!

Here is the sixth in our 2nd series of posts from Head of Carpenters Scotland, Calum MacGregor.

"It’s now been almost 12 months since the initial lockdown in March last year. It’s funny because it doesn’t seem that long. Most of us we will not have seen many of our colleagues in person for nigh on a year which is strange and tokenistic of the challenging times we live in with COVID.

Since my last blog, many things have happened. Perhaps the most notable development is the roll out of the  COVID vaccines which I am sure we all hope heralds the dawn of a new welcomed era. Optimistically, it is hoped this marks out a new chapter in the chronology of the virus and its eventual demise. One hopes that is in the not too distant future.

Business wise we continue to progress by utilising and further adapting the innovation of technology and the remote world we now primarily inhabit. It’s almost become second nature for us to undertake tasks remotely which were once the exclusive domain of the physical office environment. To name but a few MS Teams calls, physiotherapy, medical examinations are all testament to the success of that. Even the Judicial world has embraced with a whole plethora of court business now primarily convened in this manner which pre COVID would have been the stalwart of traditionalism.

Carpenters continue to adapt and embrace same, the hallmark of a pioneering business which is positive for all our clients and insurers. It is also reassuring for our team, in terms of future job security, particularly in times of economic uncertainty. However that would not be possible but for the fantastic efforts of all Carpenters team players in all departments. When viewed as a whole it inevitably pinpoints to where we deservedly are, at the forefront of the Legal Insurance world in a very competitive market place. This is no mean feat by any stretch of the imagination and cannot be underestimated as it is has been achieved by design and not default.

We continue to develop and expand our relations with insurers in various areas such as escalations and the Resolver process,  both of which are the exclusive innovative brain child of Carpenters  to name but a few. This cements our bonding with our insurer clients with a view to building a  sustainable business fit for both purpose and the future. We have also shown our business ingenuity and forward thinking in developing a workable strategy in preparation of the Whiplash reforms which come in on May of this year.

Socially it has been a trying time for many colleagues particularly for those with children and the difficulties faced with the closure of schools and nurseries. Education is the hallmark of civilised society and naturally a parental worry.  Admirably they have had to embrace agile practices to balance, parenting, teaching and work commitments which is indubitably highly commendable in anyone’s eyes. This has been supported admirably by the business promoting flexible working for affected staff to provide for that.

For my part I am incredibly grateful to all of my team for their on-going efforts in the face of various challenges the virus has thrown at us and very proud of them by the same token. I am similarly inclined towards the invaluable support from various departments in Carpenters which ensure the efficient and continued running of the business in the face of adversity.

Last but certainly not least  that sentiment extends to Senior Management for their tactful navigation though unchartered COVID waters and adapting accordingly for our benefit. Notable examples, to name but a few, being the Wellbeing Champions on Mental Health and the consistently informative and thoughtful Friday weekly briefing from the CEO, Donna Richards. In short, team work is paramount and key to our success.

Finally if I may make mention of the recent passing of the late Tom Moore, the world war veteran who died at the ripe old age of 100.  He was inspirational in anyone’s eyes and was cruelly taken from us like so many by COVID. This gave me cause to reflect on my own mum who was hospitalised two days before her 94th birthday last April with a head injury. Whilst hospitalised she contracted COVID and thankfully recovered and was eventually discharged after two and a half months. During that time neither myself nor my two brothers could visit and it was naturally a very difficult time.

It made me think how difficult things are for so many of us just now. It was also the self-realisation of  how lucky I am in the grand scheme of things in comparison to others much less fortunate and that we should not take things for granted. Moreover it re-in forced the notion that humanity must endure symbolised by the attached banner which I pass daily in Glasgow en-route to work.

Hopefully that will be the mantra for us all personally and Carpenters as a strong business in coming through the other side  of this seemingly endless pandemic intact and no doubt all the wiser and stronger for it."

We treat all claims with the same level of dedication and commitment whatever its nature or value. We believe communication is key. We deliver the highest levels of service to our clients through regular communication and expert legal advice from our teams of legal specialists.