The future of insurance fraud 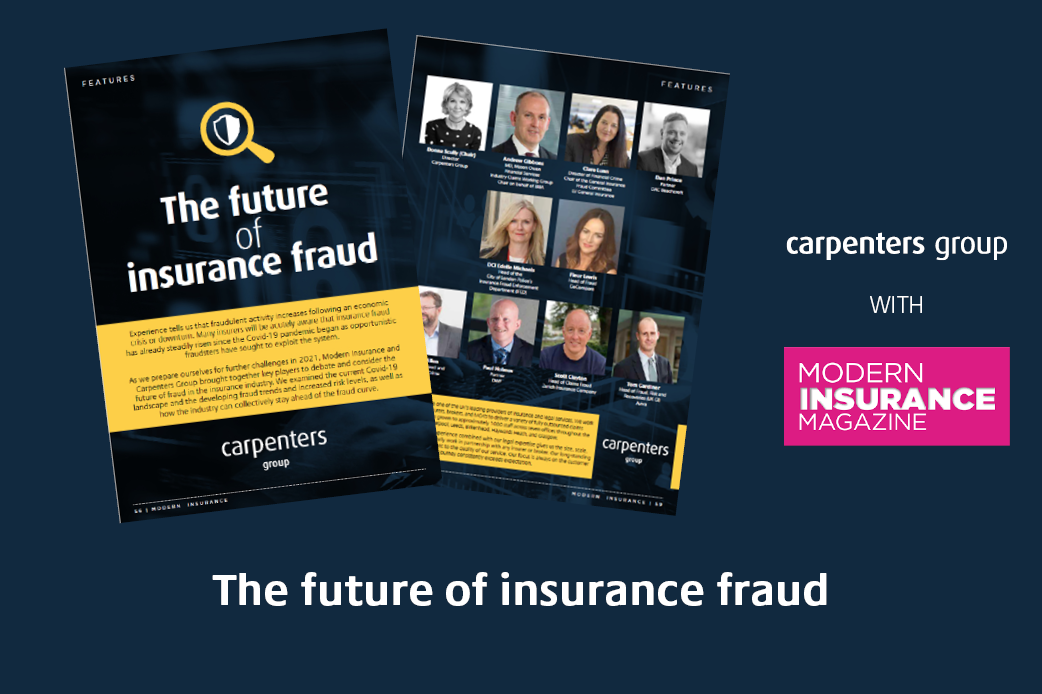 Experience tells us that fraudulent activity increases following an economic crisis or downturn. Many insurers will be acutely aware that insurance fraud has already steadily risen since the Covid-19 pandemic began as opportunistic fraudsters have sought to exploit the system.

As we prepare ourselves for further challenges in 2021, Modern Insurance and Carpenters Group brought together key players to debate and consider the future of fraud in the insurance industry. We examined the current Covid-19 landscape and the developing fraud trends and increased risk levels, as well as how the industry can collectively stay ahead of the fraud curve.

In what may be the relative calm before the full storm, it appears the industry is expecting the level of fraud to rise significantly in 2021 as the implications of the Coronavirus pandemic force further waves of economic downturn and financial difficulty; a pattern we have seen before following the 2008 recession and the subsequent increase in fraud. Donna Scully, Director of Carpenters Group, opened our discussion by asking panelists what areas of fraud they expected to emerge in the coming months following the Covid-19 pandemic and whether recent Aviva figures about policy fraud and ghost brokering were correct. Tom Gardiner, Head of Fraud, Risk and Recoveries (UK GI) at Aviva, said, “It is always difficult to unpick and separate to what extent those figures have increased due to improved capability, detection, and prevention […], and to what extent it is based on exposure,” but he went on to assert that policy fraud is a real threat post-Covid, and that it was clear that he thought we were still at the “shallow end of the curve,” hinting that the full effects of Covid-19 are yet to bite.

On to home and remote working, Scully asked attendees what part this has had to play in the rise of fraudulent activity. Had home working made businesses more vulnerable to fraudulent behavior? “We were always aware of the risks,” said Clare Lunn, Director of Financial Crime at LV General Insurance, “because you don’t need to be sat at home for there to be risks. It was important that while people are working at home that security is stepped up, and that controls and their monitoring is effective, as well as training and increasing awareness among staff members.” Lunn emphasized how it was important to create the right culture and remind staff of their responsibilities to their customers. Dan Prince, Partner at DAC Beachcroft, detailed how they have seen solicitors and accident management companies actively touting for people who have not had the right equipment that comes with home working, and asking whether they would like to make a claim. Furthermore, companies touting for claims on the back of supermarket and pub/restaurant slippages. “What we’ve found,” he said, “is that with more people at home, this has led to quite a shift in the type of fraudulent activity that we see in terms of third parties. The biggest spike, in addition to grossly exaggerated claims and the average value of claims increasing generally, together with far more multiple injury cases, is on phantom passenger motor claims, especially involving an increase in the number of very young children making claims that require investigation.” The next topic on the agenda was claims farmers and whether Covid-19 had provided ‘bad’ claim farmers with an increased opportunity. Scully outlined her concern regarding the ‘loophole’ that credit hire and credit repair would not be incorporated in the new LiP portal, and as they are not regulated by the Financial Conduct Authority (FCA), this could pose a worrying opportunity for Claims Management Companies (CMCs). With the whiplash reforms coming once more into view, Scully expressed the concern that claims farmers will have a huge opening as it will be a substantial area to move into.

Paul Holmes, Partner at DWF, explained that they “are starting to see significant claims farming within Covid claims and disease claims; “We are seeing the farmers touting for business […], we have even had our commercial clients, who have had Covid outbreaks, with claims farmers outside their buildings, with cameras, taking pictures of how many people are going in and trying to sign up names outside the premises!” Holmes argued that we must “be on the front foot.” Scully called for the FCA to intervene more readily and for both them and the Information Commissioner’s Office (ICO) “to do more.”

The discussion ended on the power of collaboration within the industry to tackle fraud and create an awareness programme. Looking ahead, our responses need to be improved as we leverage collaboration and cooperation; “We need to keep vigilant,” said Gardiner, “and keep sharing intelligence and insights […]. We need to keep focusing on the emerging threats we already know about and make sure there are good mechanisms in place to rapidly detect and respond as an industry to the new frauds that we will inevitably see, particularly with our external environment being so dynamic and likely to change.”

As a side note, Andrew Gibbons, representing BIBA, noted that the phrase ‘ghost broker,’ “originally came from FCA language, […] and is a convenient and comfortable description of a phenomenon.” However, Gibbons felt that having the word ‘broker’ associated with fraud and the illegal arrangement of insurance was not helpful, and that the industry needed to revise its phraseology and ensure that it is readily understandable by all parties and consumers. A useful note for all to consider.

Donna Scully ended the session by thanking everyone for being incredibly open and engaged with the topic and emphasized that it is important that we continue to share information and intelligence to improve the sector’s collective response to fighting fraud.